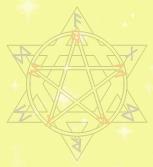 My Gods
Paganism
My Wheel
My Journey
F.A.Q.s
My Journal
Menu
I follow a path of the eclectic tradition, which basically means that my path is based on my belief and research tempered by my understanding and personal experience. I don't class myself as anything other than a Pagan, though if pushed I may class myself simply as a seeker, for I feel that no-one ever truly finds all the answers.

I do not take grand titles, such as witch, priest or shaman, even though I may follow similar practices and use shared techniques.  The closest that I use is the name 'Cosmic Fool' which while primarily serving as my online identity, also reflects my respect for the wisdom of the trickster and the duties of the courtly fool.  That some people may label me as many things including 'witch' is fine, though I wonder if I am in truth worthy of such an honour, 'fool' is quite  common too, though I doubt they  understand the compliment they pay me.

My path is a personal one, and as such I present it here for information only. I do not intend it as an exercise in recruitment, as that would betray some of my deepest beliefs, nor do I intend it to be seen as the 'one and only true path' mainly because there is no such thing; all paths are valid and true for their followers. At times my path may run parallel or even cross over with others, it is organic and evolving, where it goes I know not, only that it goes ever forward.

Foundations of my path

For full details of my spiritual belief and of the spiritual journey that led me to this point, please follow the links on this site.

The core principles of my belief are:

All things are alive, conscious and equal

The core aims of my path are:
Which are achieved by holding to these 8 values:

In general my path is a fundamental part of who I am, it influences both my perceptions and my actions.

Unlike some of the more documented faiths I am not bound by a single or a set of written doctrines. Instead I am free to research and evolve my own path in keeping with my core beliefs. Setting out those beliefs in words as I have here is not an easy task, but it does help to put them into perspective and as such is a useful exercise.

Should my path change, as it may, I will endeavour to update this page and annotate those changes.

While in many ways I consider my Paganism essentially a part of my self, there are a few outward props and activities that I feel compliment my journey.

Firstly certain symbols hold specific meanings for me, and I may use them in my practice. The meanings that I assign to these symbols are in some cases personal and may not reflect those held by other Pagans or in some cases other 'mainstream' faiths. I set out the main symbols and my personal interpretations on the table to the right.

Clichéd it may be, but I usually wear a pentacle, which I see as the main symbol of my faith, that it may offer protection and/or make a statement are both nice, but the main reason I wear it is simply that I like it.

I use no wand in my workings, nor do I usually cast a circle - though I will if the occasion demands.

I have an altar set up at home, which is a permanent feature, though for ritual I rebuild it in a more convenient spot (usually in the same room) and customize it for the specific ritual. I have on the altar a pair of images which portray the way I perceive my lord and lady, a small dish for offerings, a key, some coins and a small tea-light - in general I don't use candles.

The images of my gods are not there to 'house their spirits' or to act as idols, they simply function as an aid to concentration, Likewise the flame of the tea-light is simply there as a point of focus - although it does have a specific use in my Midwinter ritual.

Within my path I honour Nature (the Divine Spirit) by marking the movement of the year, the passing of the seasons and the progress of the sun through the sky. I do not generally celebrate New or Full moons (esbats) but do observe the 8 sabbats common to Wicca and modern Druidry.

That these 8 festivals are largely a modern invention is of no real importance to me. I find them useful as a connection to the changing of the seasons and as such they prove their worth to me. Full details can be found by clicking on the link for 'My Wheel' along with the details of any specific rituals.

When it comes to rituals I feel I must stress again that I do not believe in the use of drugs, though I may use alcohol in my toast, and also that my gods do not demand bloody sacrifice, which is just as well as I would not be able to work with such a god. In truth it seems that the gods today have in general given up on the blood and gore of the past, though I must point out that it would be a mistake to assume such practices were restricted to the pagan peoples, as researching the Abrahamic faiths will show. Nowadays the sacrifices made are more likely to consist of offerings of food and drink-perhaps as part of a shared meal or in ritual, sharing of songs/rhymes/stories, hand made offerings, tobacco, spices, incense, time given to helping others or money given to charity-gods don't have bank accounts.

Of Honour and Truth

My path is one trod of honour and truth,
Fairness to all under this star-vaulted roof.
I honour the Earth and give respect to all life,
While seasons change, through both good days and strife.
I hold to my word as firm as to laws,
Standing before gods who share in this cause.
My lord he is life, death, hunter and prey,
My lady is mother but leads in the fray.
I give them their due, and their advice take,
But know that decisions, I, must alone make.
Though they are wise and caring that’s true,
My triumphs are mine, as are my mistakes too.
I stand by my actions, whether found right or wrong,
For my path is of honour, and truth makes it strong.